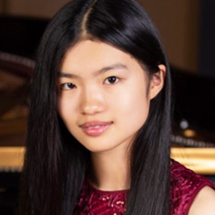 Seventeen-year-old pianist Natalie Zhang is a junior at the Weston High School of Massachusetts and studies privately with Michael Lewin.

She is a National Young Arts Winner and a Fellow of the Artemisia Foundation. Recently, she was featured on the NPR’s “From the Top” as a soloist. Since her solo debut at the Carnegie Hall at the age of six, she has performed at venues such as the Boston Symphony Hall, Seattle Symphony Hall, Merkin Hall, PepsiCo Recital Hall, Rose Wagner Performing Center, and Fort Worth Modern Art Museum. She made her orchestra debut with the Virtuosi Brunensis Orchestra in Italy at the age of 12.

She is the Boston Regional Director of the Back to Bach Project, an organization that promotes classical music to young kids all over the world. Besides piano, she is a National Young Arts winner and National Scholastic Arts Gold medalist in Design Arts.