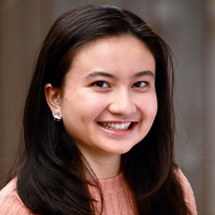 Yearous, age 16, is a sophomore and has been playing the piano for ten years. In the middle school she studied at Denver school of the Arts and now is a student for piano at the Kinder High School for Performing and Visual Arts.

She has won prizes in many local competitions such as the MTASN Festival (2018 and 2019) and the HSPVA Concerto Competition. She enjoys collaborating with other musicians and has played in chamber music groups with other pianists. She won the Second Prize in the HMTA Ensemble Music Contest (2021) and performed on radio with Encore Houston. Kaysi has also played as a collaborative pianist in vocal recitals.

In addition to her private studies with Dr. Todd Van Kekerix, she has participated in master classes with such artists as Lowell Liebermann.

In her spare time, Kaysi enjoys reading and traveling.