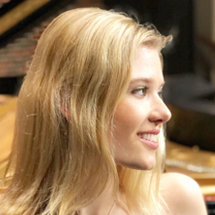 Halle’s music has taken her across borders to France, where, as a participant in the French Piano Music Tour, she had the opportunity to study French music and culture, as well as perform in a musicale at Château des Faugs, the ancestral home of famous composer Vincent D’Indy. As recipient of the Texas State International Piano Festival’s Betty Dickinson Award, Halle was invited to perform at the Blanco Performing Arts Center. She was Grand Prize winner of the McKinney Young Artist Competition and has won awards in the Weatherford International Piano Competition, Texas State International Piano Festival Concerto Competition, and Texas Music Teachers Association’s student affiliate competitions. At the age of 12, Halle performed on National Public Radio’s “From the Top”.

Halle’s music has also established her locally. She is the daughter of concert pianists and can remember being surrounded by Classical music from a very young age. She and her parents presented a benefit recital, “Pucketts at the Pianos” for the Abilene Philharmonic Orchestra at Abilene, Texas’ Historic Paramount Theatre. The innovative and eclectic program included a variety of musical styles and combinations of pianos/hands.

She received her Bachelor’s Degree in Piano Performance (Magna Cum Laude) from Texas Christian University, where she studied with John Owings. She was awarded the School of Music’s prestigious Nordan Piano Scholarship, Lili Kraus and Spitler Scholarships, and TCU Academic Scholarship. Halle finds joy in collaborating with her colleagues and was recipient of the Judith Solomon Piano Award for her achievements in Chamber Music at TCU. In addition to performing, she also enjoys the art of pedagogy and was recently awarded a Graduate Assistantship of Keyboard Studies at Peabody Institute, where she is a Masters student studying with Dr. Steven Spooner.