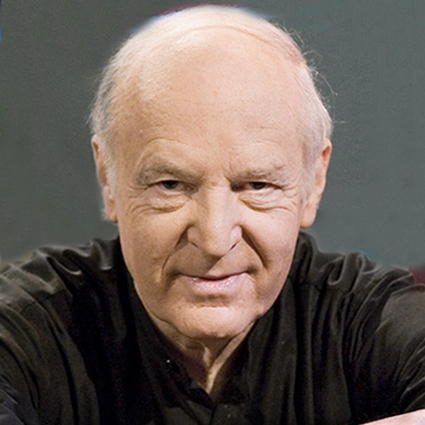 Beginning his artistic career at the age of fifteen, Israeli born Arie Vardi went on to receive international acclaim as one of the country’s foremost pianists. After winning the Chopin Competition in Israel, he appeared with the Israel Philharmonic Orchestra with Zubin Mehta, and upon winning the George Enescu International Competition in Bucharest, he played numerous concerts throughout Europe. Alongside his study of music at the Rubin Academy, he succeeded in achieving a degree in law at Tel Aviv University.

Vardi continued his piano studies in Basel with Paul Baumgartaner and studied composition with Pierre Boulez and Karlheinz Stockhausen. He has performed widely as soloist with major orchestras under the baton of Semion Bychkov, Sergio Commissiona, Lukas Foss, Kurt Masur, Jerzy Maksymiuk, Zubin Mehta, Paul Paray, Paul Sacher, Gustavo Dudamel and David Zinman, among others. His concert tours have taken him to Eastern and Western Europe, the United States, Latin America, the Far East, Australia and Japan. His first Russian tour, in 1992, included performances in Moscow, St. Petersburg and other cities. Vardi performs regularly as soloist-conductor, playing the complete set of concerti by Bach and Mozart, part of which he has played on the Hammerfluegel. In recent years he has specialized in the literature of the Impressionist period, including the entire repertoire of Debussy and Ravel. His RCA records have won international acclaim and prizes.

Mr. Vardi’s extensive repertoire includes various Israeli works, many of which were dedicated to him. In addition to his concert career, Arie Vardi is a professor of piano at the Hochschule fuer Musik in Hannover and at the Rubin Academy of Music, Tel Aviv University, where he served as its director and chaired the Piano Faculty. More than 30 of his students have won first prizes in international competitions. Arie Vardi is best known to television viewers for his series “Master Classes”, the family series of the Israel Philharmonic Orchestra which he conducts and presents, and currently for his new series “Intermezzo with Arik”.

He has been a invited to serve as jury member in most of the leading international piano competitions, such as Chopin in Warsaw, Leeds, Van Cliburn, Tchaikovsky in Moscow, Sydney, ARD, Beijing, Beethoven in Vienna and Bonn, Cleveland and Hamamatsu, as well as in Milan, Salt Lake City, Santander, Tokyo, and Seoul. He is the Artistic Advisor and Chairman of the Jury of the Arthur Rubinstein International Master Competition.

Mr. Vardi has held Master Classes and presented lecture recitals at the Juilliard School of Music, the Paris Conservatoire, the Moscow Tchaikovsky Conservatory, the London Royal Academy, and many other major music centers.

In the 2001 season, Arie Vardi directed, conducted and played a series of five concerts with the Israel Chamber Orchestra. The series, entitled “The Piano Concerto,” featured twelve concertos ranging from Bach to the 21st century. In the 2004-5 season he launched a new weekend series with the Israel Philharmonic, “Morning Intermezzo”, where he serves as conductor and presenter.

Mr. Vardi was the recipient of the Minister of Education Award in 2004 for lifetime achievement.