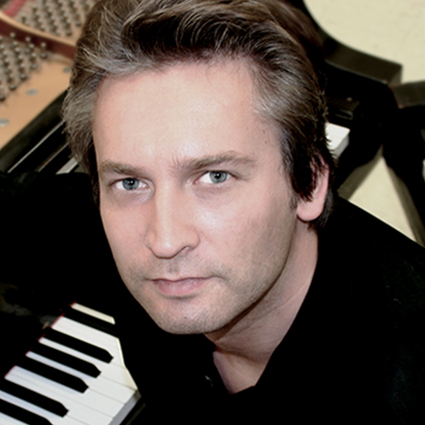 Andrey Ponochevny’s career has encompassed the globe as a preeminent talent among performing artists today. Cleveland’s The Plain Dealer has written that, “His performance seized attention from first note to last.” Additionally, The Washington Post stated that his playing had “power and finesse that brought the audience to its feet in a long-standing ovation.”

Among his numerous awards, he was twice named “Outstanding Artist in China” (2009 and 2011) in addition to having been given the positions of “Honorable Professor” of Jilin College of Arts (China) and “Visiting Professor” at Beihua University (China). In his hometown of Minsk (Belarus), he was awarded the title “Minskovite of the year” in 2002.

In the concert hall, Ponochevny has garnered equal success having performed extensively in North America, South America, Europe and Asia. He has given solo recitals at major venues including Lincoln Center and Carnegie Hall in New York City, The Kennedy Center and Phillips Collection in Washington, D.C., Preston Bradley Hall in Chicago, the Cleveland Institute of Music, Beethovenhalle in Bonn, Philharmonie in Cologne, City Hall in Hong Kong, Palacio de Festivales de Cantabria in Santander, Salle Alfred Cortot in Paris, National Philharmonic Hall in Warsaw, Stadtcasino in Basel and the Harbin Opera House in China.

In addition to his concert career, Mr. Ponochevny teaches at the University of Dallas since 2007 and, in addition, has begun his appointment as an Artist in Residency at SMU in August 2022.

Andrey Ponochevny is a Yamaha Artist.