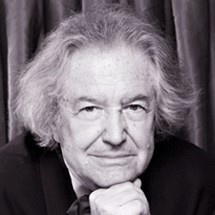 Mikhail Voskresensky is a famous Russian concert and recording pianist, Professor of Moscow Tchaikovsky Conservatory, chair of the Piano Department where he has been teaching since 1959.

His concert carrier began in1955, when he performed Chopin’s f-moll concerto with the Bolshoi Theatre orchestra under the baton of Eugeny Svetlanov in Warsaw during the 5th World Youth Festival. Over the next three years, he became a prize-winner of quite a number of international piano competitions: the 1st Schumann Competition in Berlin, the 1st Rio de Janeiro Piano Competition and the 1st Georgy Enescu Competition in Bucharest.

His important achievement was the 3rd prize in the First Van Cliburn International Piano Competition in Fort Worth in 1962.

During the Prague Spring International Music Festival of 1957 which was dedicated to modern music, Voskresensky performed Piano Concerto #2 by Dmitry Shostakovich in the presence of the composer who highly commended his performance

From 1963 to 1975, Voskresensky was permitted to give concerts only in the USSR and of Eastern Europe for political reasons. During this psychologically hard period, he increased his repertoire and performed Beethoven’s complete piano sonatas twice in Moscow. He also made an LP recording of all Chopin’s nocturnes, scherzos, and polonaises. It was the beginning of his marathon to prepare and perform all piano works by Chopin, which he did in Moscow and Yaroslavl later, in 1982.

His concert career successfully developed and in 1966 he was awarded the artistic title of the Outstanding Artist of Russia.

In 1975, Voskresensky was invited to be a member of the jury at the Leeds International Piano Competition, and backed by prof. Mstislaw Smirnov , vice-rector of the Moscow Conservatory, was allowed to go to the UK. That was the competition where Dmitry Alexeev received the First Prize . Since that time he has been giving concerts and masterclasses abroad. He has played under the baton of John Pritchard, Kurt Mazur, Charles Dutoit, Franz Konwichny, etc. He has taken part in many festivals, including Semaines Musicales in France, the Piano Forum in Berlin, the Liszt Festival in Los Angeles, toured China, Japan, Mexico, South Korea. He was invited to be a visiting professor of the famous Toho University in Tokyo, where he continues to teach until the present time. In1989 he received the highest artistic title of Russia, the People’s Artist of Russia.

His recordings include almost all Chopin’s works , Schumann’s 1st  Piano Sonata, Fantasy, both Carnavals , Kreisleriana, Symphonischen Etudes, many sonatas by Beethoven, all sonatas by Mozarts, both concertos and the Second Sonata by Shostakovich, Prokofiev’s 3rd and 8th Sonatas, Piano Concerto #2, and Visions Fugitives … The other recordings can be found here - https://youtube.com/c/MikhailVoskresenskypianist

Teaching. For 8 years, Voskresensky worked as assistant of his legendary teacher, Lev Oborin. During that period, he worked with Oborin’s students and taught Vladimir Ashkenazy, Boris Berman, and many others. Since receiving his own studio in 1963 he has brought up many professional pianists, including -

His students have received more than 120 International prizes and 61 gold medals. Among them, there are numerous musicians who are well-known in Europe – Oleg Marshev, Evelyna Voronzova, Yury Favorin, Sergey Koudriakov, etc. 20 of his students have become professors of the Moscow Conservatory and are currently working there.

Prof. Voskresensky has been on the jury of many prestigous international competitions. He is the Permanent Chairman of the Jury of the Scriabin International Competition in Moscow.