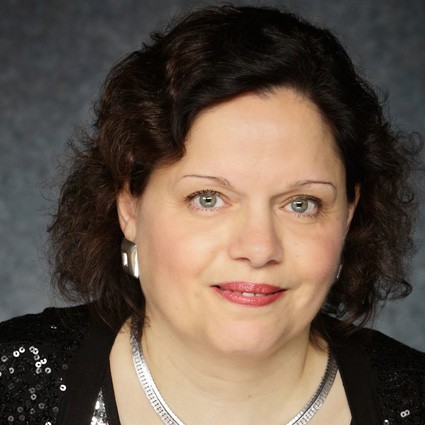 Hamsa Al-Wadi Juris, born in Baghdad, grew up in Damascus, where she began her musical education at the Damascus Conservatory of Music founded by her father, Solhi Al-Wadi (1934-2007), the doyen of classical music in Syria. There she started piano lessons with her mother, Cynthia Everett Al-Wadi (1934-2009), a graduate of London’s Royal Academy of Music, and continued with Russian teachers, especially with Prof. Vladimir Bunin.

In 1982 Hamsa graduated with honors from the Moscow Tchaikovsky Conservatory, where in 1985 she completed post-graduate studies. Her teacher was Prof. Pavel Messner (1931-2005), former assistant to famous Russian pianist Emil Gilels. At the 1981 International Beethoven Piano Competition in Vienna she won fourth prize.

Concert appearances have taken Hamsa Al-Wadi Juris to the Baltic countries, Ecuador, France, Germany, Great Britain, Iceland, Russia, Scandinavia, the USA, and also to the Near East and Gulf States. She often performs in piano duos with her husband, Ecuadoran pianist Carlos Juris.

Since 1985 Hamsa resides with her family in Finland, where she has a teaching position in the piano faculty of the University of the Arts Sibelius Academy of Helsinki. Among her students are laureates of national and international competitions. She also works as a juror in piano competitions in Finland and abroad.