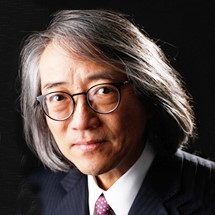 Hung-Kuan Chen has enjoyed fruitful artistic collaborations with, among others, Christoph Eschenbach, Hans Graf, George Cleve, Joseph Silverstein, David Shifrin, Roman Totenberg, Cho-Liang Lin, the Shanghai Quartet, Sui Lan and Andrew Parrott. His most meaningful artistic partnership is with his wife, Tema Blackstone, with whom he frequently performs as a piano duo.

Hundreds of students worldwide have benefitted from Hung-Kuan Chen’s deep knowledge and love of music. He is currently on the faculty of The Juilliard School, and is on the faculty for Artemisia Akademie. He previously served as Chair of the piano department of Shanghai Conservatory and was on the faculty of New England Conservatory as well as visiting professor at Yale School of Music. He has adjudicated prominent international piano competitions such as the Van Cliburn, Busoni, Shanghai, and Honens. Among notable pianists he has taught or coached are Yuja Wang, Lukas Vondracek, Sean Chen, Maxim Lando and Niu Niu.