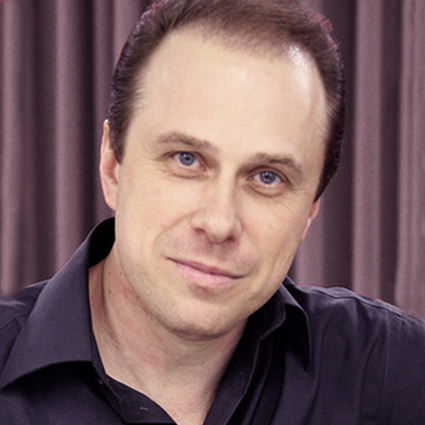 IGOR RESNIANSKI received his formal music degrees in Russia graduating with distinctions from Novosibirsk Music College under Professor Elena Storojuk, and Novosibirsk State Conservatorium under Professor Mary Lebenzon. He continued his studies in the United States completing the Artist Diploma program under Dr. Tamás Ungár at Texas Christian University. In addition, he studied as a full scholarship student at the TCU/Cliburn International Summer Piano Institute, where he was under the tutelage of distinguished musicians Paul Badura-Skoda, John Lill, Fanny Waterman, and György Sebök. Mr. Resnianski holds a Doctoral degree from Temple University in Philadelphia where he studied with Professor Harvey Wedeen. His Monograph advisor was Dr. Alexander Brinkman.

Prior moving to the United States in 1995, he was full time Professor at the Novosibirsk Music College as well as an Assistant Professor at the Novosibirsk Music Conservatory. His performance career during that time took him around the country. Mr. Resnianski performed in numerous philharmonic halls as a solo artist, soloist with orchestras, and a chamber musician. He appeared in the famed halls of Moscow and St. Petersburg including the historic Glinka Philharmonic Hall in St. Petersburg. For many years he performed with violinist Ilya Konovalov, who is now a concertmaster of Israel Philharmonic, and recorded two CDs with him that were released by the St. Petersburg Recording Company and Sony Entertainment.

In June 1996, Mr. Resnianski made his concerto debut in America performing with the Fort Worth Symphony Orchestra under conductor Keri-Lynn Wilson and in South America performing a solo recital at the Medellin International Festival, Colombia. Since then he performed with New Orleans and Acadiana Symphony Orchestras, LA; gave solo recitals in Fort Worth and Arlington, TX; New Orleans and Lafayette, LA; Cincinnati, OH and Palm Beach, FL; Philadelphia, PA and Camden, NJ; Santa Clara, CA and Houston, TX; etc. His performances were televised and broadcast in Novosibirsk, Russia; New Orleans, LA; Palm Beach, FL; Cincinnati, OH; etc. He has been featured on the PBS/WHYY Y-Arts television channel performing several sonatas by Scarlatti.

Dr. Resnianski was presented in Master Classes in Philadelphia, PA; Houston, TX; New Orleans, LA; Lafayette, LA; Santa Clara, CA; Camden, NJ; West Chester, PA; Medellin Colombia, etc. For many years, he served as a faculty and guest artist at the TCU/ Cliburn Piano Institute Fort Worth, Texas. Since 2006 he is on the faculty of Piano Texas International Academy and Festival in Fort Worth. In January 2007 Dr. Resnianski taught Master-Classes at the Samuel Barber International Festival at West Chester University of Pennsylvania. For several years he gave lectures at Rutgers University in Camden, NJ during the Mozart summer course. He was appointed as an Artist Associate of the Music Department at Rutgers University in Camden, New Jersey in the fall of 2001.