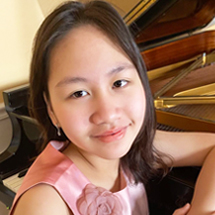 Anh Hoang Nguyen, born in 2008 in Hanoi, Vietnam, has been studying and playing piano since the age of four. Formerly a student of Co Tran, she received invitations to perform in the Young Pianist Concerts in 2014, 2015, and 2016 by the Magic Music Center in Hanoi. She was admitted to the Vietnam National Music Academy in Hanoi as a student of Associate Professor Tuyen Dao, but in the fall of 2020, she relocated to the United States, where she is now a student of Yamaha Artist Dr. Amy E. Gustafson.

She has performed in Merkin Concert Hall and Carnegie Hall’s Weill Recital Hall in New York City. She also recently made her debut with the Vietnam National Orchestra, performing Kabalevsky’s Third Piano Concerto. In addition to her solo piano studies, Anh enjoys playing with the Masterworks Student Orchestra of Central PA.  Her hobbies include crafting and listening to music.