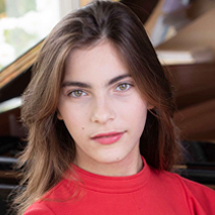 Anna Isabel Audenis, 16, started playing the piano at the tender age of five and has since charmed audiences and judges a like with her thoughtful and musical interpretations. At eight years old, Anna began piano lessons with Eduardo Delgado before transferring to Rufus Choi at age twelve, with whom she currently studies. Anna has also been fortunate enough to have participated in master classes with Oxana Yablonskaya, Antonio Pompa-Baldi, Eteri Andjaparidze, Sasha Starcevich, John Perry, and Alexander Korsantia, just to name a few.

Since 2014, Anna has been an active honor member of Junior Chamber Music and in 2019 was selected as a JCM debut artist. In 2015, Anna made her first appearance with Orchestra Napolitana and the year prior was invited to play and speak at TEDxOstrava 2014.

In addition to studying music herself, Anna has been teaching piano to children since 2020. Anna speaks French and Czech fluently and in her free time enjoys learning Russian. Additionally because of her interest in clouds and the weather, Anna is a member of the Cloud Appreciation Society.