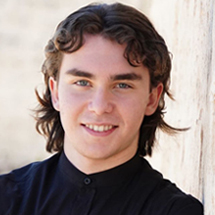 Joseph D’Urso was born in San Michele Salentino, in the south of Italy in 2007. He started playing the piano at the age of five. At six, he was admitted to the  Conservatory. Now he is  attending   the  Bachelor of Music degree at  Nino Rota Conservatory in Monopoli where he is studying under noted pianist Stefania Santangelo.

In March 2017 he participated in the television program “Little Big Show” broadcast  on  Canale Cinque with the famous Italian conductor Gerry Scotti. He took part in the  Piano  Lab in Martina Franca inaugurated by Morgan. In 2016 Joseph composed a piano piece entitled ‘The Arrival’. In November 2017, in Rome, he was national semifinalist in the Tour Music Fest Mogol where he played a piece of his composition ‘Cry’. In November 2018, he participated in the television program Prodigi on Rai1 conducted by Flavio Insinna and Nathalie Guetta, astounding characters of the caliber of Beppe Vessicchio, Pippo Baudo, Serena Autieriand and Daniel Ezralow. Joseph was the smallest participant and played a medley entitled "Dream and Passion" in which the inspiration and virtuosity of the very young pianist emerged with a medley in which the classical music of Chopin and Beethoven blended perfectly with the modern rhythms of Queen. Joseph was accompanied by the RAI Orchestra of the Sesto Armonico conducted by Mirca  Rosciani.

During his career he held lots of concerts with several associations like A.GI.MUS and Defeo Trapani and he also won several first prizes in the following National, European and International Music Competitions: Erik Satie, Steinway & Sons, Città di Bucchianico, Giuseppe Piliego, Domenico Savino, Domenico Sarro, Città degli Imperiali, Matteo Colucci, A.GI.MUS-Città di Francavilla Fontana, Siena and Rito Selvaggi.Recently, In May 2021 he recorded a concert which was streamed, performing music by Chopin, Liszt, Beethoven and in October 2021 he played Mendelssohn Concerto No. 1 with the Conservatory Orchestra.

Joseph, in addition to his great love for music, cultivates various hobbies including a huge passion for football (he is a great AC Milan fan and plays with a local team), tennis (he especially likes Berrettini and Sinner), playing Padel, reading (mostly novels and horror), American  football (he sympathizes with  all  NFL  teams), cinema (drama  films  and TV series, thrillers and action) and art (in particular he loves Impressionism and the incredible works of Degas).