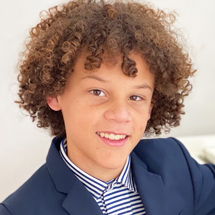 Kayden Kelly has been playing piano since he was five, the violin from age seven, and has been a violinist of the Santa Fe Youth Symphony program since he was eight.

He has attended summer programs at Juilliard in Switzerland and the Mozartium International “Young Excellence” Academy in Austria. At age 13, he was one of the youngest of 20 international piano students selected for the Curtis Young Artists Summer Program. Kayden has been a part of the Curtis Mentor Network program for piano the last 2 years. He has participated in masterclasses with Piotr Palechny, Olga Kern, Anne McDermott and Dmitri Alexeev.

Kayden has performed in six different countries: Costa Rican National Theater for 600 people, including the Costa Rican vice president; Alion Baltic Music Festival in Latvia, Estonia and Finland; Lindlar Music Festival in Germany; and in Salzburg, Austria. Kayden performances have received press from the German newspaper in Lindlar as well as featured on New Mexico KRQE 13 TV and the local classical KUNM radio station. Kayden performed twice for an audience of 800 people at the Lensic Theater in Santa Fe, New Mexico for the 2019 NM Music Platinum Awards and Mendelssohn Piano Concerto No. 1 in G minor (Third Movement) with a quartet for “Prodigies,” as well as the Beethoven Piano Concerto No. 3 (First Movement) for the “Ghostlight Sessions” online program.

Kayden has received scholarships to the Sphinx Performance Academy for violin at Curtis Summerfest for violin for the last four years.

Kayden’s other hobbies are reading fantasy novels, going to the opera theater, chess, swimming and cubing.