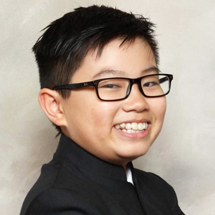 Bill started learning the piano after discovered by the world-renowned pianist Dang Thai Son at the age of five. He was with Richard Raymond at Montreal Conservatory of Music and is now a scholarship student of Michael Berkovsky at the Phil and Eli Taylor Academy Performance for Young Artists. Bill has taken masterclass with James Anagnosons, Anya Alexeyev and John O’Conor.

Bill enjoys bonding with his three brothers through piano and video games.