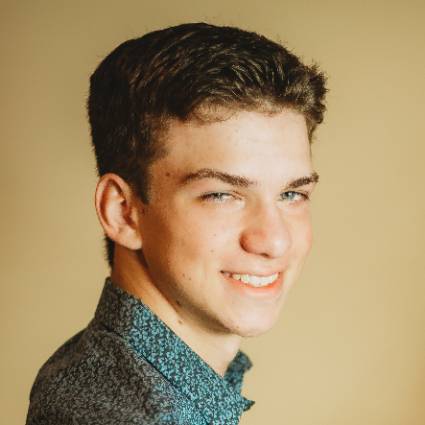 Zachary Alan Houlton (b. June 5, 2006, Houston,TX) is currently a freshman at Summer Creek High School in Humble, TX and started learning the piano at the age of five. He is a student of Dr. Janice Fehlauer in Kingwood, TX and studied with Pamela York previously. He has performed in numerous piano recitals and tournaments, as well as piano ensemble performances at the TMTA’s annual conventions in Dallas. Zachary also plays cello in his high school orchestra and has played with the Houston Youth Symphony. Last year he was accepted as a Junior Finalist in the Honors Junior Orchestra for the 2020 Middle School Honors Performance Series. Zachary’s parents are Geoffrey and Krisztina Houlton (classical guitar teacher/music therapist) and he has a younger sister, Zoey. Zach has lived in Singapore in his early years due to his father’s work and has had an opportunity to travel with his family and school to Europe and Canada on several occasions. Zach has fluent comprehension of Hungarian and is learning Spanish in school. He enjoys attending classical concerts and listening to music. His favorite composers include Rachmaninoff, Liszt, Chopin and Beethoven but he also likes jazz artists, such as Dave Brubeck, Chick Corea and Miles Davis. In addition to being a musician, Zach is an avid golfer and is a member of his high school varsity golf team. He loves to read, spend time with his friends and travel.