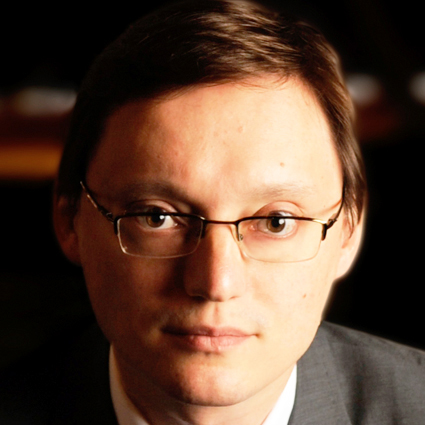 Known for a ravishing technique and his compelling musical conviction, pianist Stanislav Ioudenitch is part of the elite group of Cliburn Gold Medal winners, having taken home the Gold Medal at the 11th Van Cliburn International Piano Competition. In addition to the Cliburn Gold Medal, he was also the recipient of the Steven De Groote Memorial Award for Best Performance of Chamber Music. His profoundly warm and intelligent performances have won him prizes at the Busoni, Kapell, Maria Callas, and New Orleans competitions, among others.

“He searched deeply into Mozart’s Piano Concerto No. 21 in C, K. 467 (a.k.a. the “Elvira Madigan” concerto), shaping every phrase fluidly and poetically with a light, crisp yet never brittle touch. Nothing was blurred or precious, and his playing, even at its gentlest, had an understated rhythmic spine.”

Stanislav Ioudenitch is also featured in Playing on the Edge, Peter Rosen’s Peabody Award-winning documentary made for PBS about the 2001 Cliburn competition.

Ioudenitch is continually invited to teach master-classes and to serve as a jury member in piano competitions around the world.

Stanislav Ioudenitch is the founder of the International Center for Music at Park University (Kansas City) where he is Artistic Director and master teacher of piano. He is also on the faculty at Oberlin Conservatory. In addition, he is the vice-president and piano professor at the International Piano Academy Lake Como, and the director of the Young Artists Music Academy International in Kansas City.