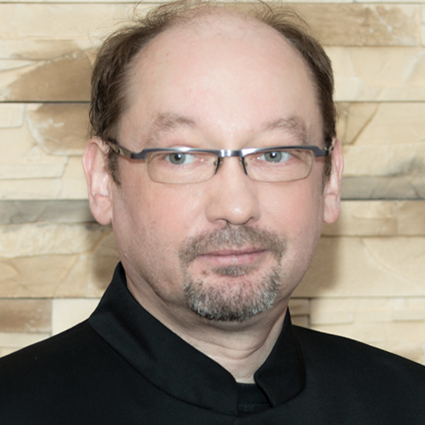 Graduate of Professor Józef Stompel's piano class at the Academy of Music in Katowice. In the years 1991-1996, he perfected his performing skills under Karl-Heinz Kämmerling, André Dumortier and Jean-Claude Vanden Eynden. Prizewinner of the International Marguerite Long and Jacques Thibaud Piano Competition in Paris and Montreal. He was the best Polish contestant of the 12th International Fryderyk Chopin Piano Competition in Warsaw, where he was granted the prize for the best performance of polonaise and a number of non-statutory prizes.

Soloist and chamber musician, he has performed in various venues across Europe, North and South America. He has collaborated with most Polish symphony orchestras, the Aukso Orchestra, the Silesian Quartet, the Camerata Quartet, Royal String Quartet, as well as violinists Szymon Krzeszowiec and Piotr Pławner, and soprano Ewa Iżykowska. He has made about a dozen of recordings for such labels as Polskie Nagrania, Bearton, DUX, Sony Music Polska, IMC and Chandos, featuring works of Bacewicz, Brahms, Chopin, Debussy, Liszt, Schumann, Szymanowski and Zarębski. In the years 2000 and 2005, his recordings were granted the Grand Prix du Disque Frédéric Chopin, and in 2002, 2019 and 2019 - the Fryderyk Polish Music Award.

Since 1998, he has been engaged in teaching. In the years 2008-2012, he served as Deputy Dean for Academic and Teaching Affairs at the Karl Szymanowski Academy of Music in Katowice. In the years 2012-2016, he headed the Piano Department at the same school.

Currently, he is also a professor at the Piano Department of the Fryderyk Chopin University of Music in Warsaw.