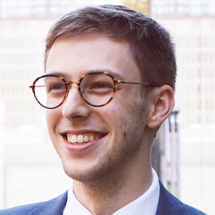 Captivating audiences with refined musicality, clarity of interpretation and a commanding stage presence, Isaac Foreman is establishing himself as an exciting and versatile artist.

Throughout the 2019 - 2020 season, Isaac appeared as a featured artist for Cliburn in the Classroom, the signature educational outreach program of the Cliburn, which annually exposes more than 30,000 public school students to classical music. In music festivals across the globe, Isaac has performed as recitalist, concerto soloist, and chamber musician at Music Fest Perugia (Italy), PianoTexas International Festival & Academy (USA),Tel-Hai International Piano Masterclasses (Israel), The Festival of American Song (USA), and Semper Music International Festival in Völs am Schlern (Italy) where he performed Alexander Knaifel’s piano quintet, In Air Clean and Unseen, with the composer in attendance. In 2021, Isaac performed at the Academy of Fortepiano Performance in Hunter, NY. In addition to chamber music repertoire, Isaac is also an active art-song collaborator, and received the Judith Solomon Award in Collaborative Piano.

Notable past performances include Grieg’s Piano Concerto in A minor with the Brunesis Virtuosi Orchestra in 2017, and an appearance as recitalist on the Fort Worth Symphony Orchestra's classical concert series during their 2019 celebration of the music of J.S.Bach. Always having a deep love for the music of J.S.Bach, Isaac’s 2014 solo piano recital debut in Fort Worth, Texas featured the complete Sinfonias (three part inventions) of J.S.Bach. As a harpsichordist, Isaac has performed numerous times with Collegium Musicum TCU. As an accomplished organist, Isaac won first prize at the 2017 William C. Hall Pipe Organ Competition, and second prize in the 2017 AGO/Quimby Southwest Regional Competition for Young Organists. Isaac studied organ and harpsichord with Dr. H. Joseph Butler at Texas Christian University, and served as organist at First United Methodist Church of Hurst, Texas for six years.

A native of Fort Worth, Texas, Isaac received a Bachelor of Music in Piano Performance (graduating summa cum laude in 2020) at Texas Christian University under the guidance of Dr. Tamás Ungár. At TCU Isaac was a recipient of the prestigious Nordan Scholarship and Lili Krauss Piano Scholarship. Isaacis currently pursuing a Master of Music in Piano Performance at The Juilliard School in New York under the guidance of Mr. Jerome Lowenthal. At Juilliard, Isaac is a recipient of the John and Henry Steinway Scholarship and Turkenich Piano Scholarship, and is a member of the College and Pre-College staff accompanist roster.