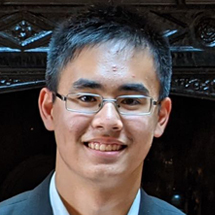 16-year-old Joe O’Grady has been playing the piano for 12 years.  Born in Dublin from Chinese/Irish parents he has been studying with John O’Conor since the age of six and now also studies with Hugh Tinney at the Royal Irish Academy of Music.

He has had remarkable success at piano competitions winning 1st Prize at almost all the competitions at the Feis Ceoil in Dublin, Ireland’s national music competition. He has also performed widely at the National Concert Hall in Dublin, at the Royal Dublin Society Rising Stars series and many other special events including the launch of the Chinese New Year Festival at the Hugh Lane Gallery organized by the Dublin City Council, the China meets Ireland event at Birr Castle, the Russian Music Festival in Dublin, the launch of the Music for Galway Season at the Swiss Embassy in Dublin, the launch of the New Ross Festival,  fundraising concerts for the Dublin International Piano Competition at the Westbury Hotel , and in Dublin Castle as part of the Great Music in Irish Houses Festival.

His concerto appearances include playing with the RIAM Chamber Orchestra in Trinity College Dublin and in University College Dublin’s Astra Hall with the RIAM Symphony Orchestra. At the age of 9 he made his American debut in New York performing with the New York Concerto Sinfonietta at Carnegie Hall. Already this year he has won both the junior sonata and concerto cups at the Feis Ceoil in Dublin, the Ursula Ni Chuinneagain Bursary for Young Pianists, the Lucien and Maura Teissier Scholarship and has been chosen as a member of the William Finlay programme for Gifted Young Pianists by the Dublin International Piano Competition.