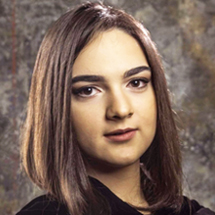 My name is Lizi Kakabadze, I was born in Georgia, Tbilisi in 2001. From 2006 to 2016 Istudied at the Z. Paliashvili Central Music School in Tbilisi. After I continued my musical education at E. Mikeladze Central Music School in the class of Natalia Natsvlishvili. Presently, I am furthering my education at Tbilisi State Conservatoire. I was studying with recently passed Emeritus Revaz Tavadze and after 2020 December, I continued study with Associated Professor Manana Gotsiridze.

The same year, I participated in masterclasses and was chosen by the jury to perform in two concerts at Grosser Ehrbar Saal in Vienna Prayner Konservatorium –Vienna International Pianists –VIP Academy. In 2020, I participated in Tbilisi Piano Fest organized by Dudana Mazmanishvili. I had very interesting Masterclasses with Musicians including Massimilliano Ferrati, Jerome Rose, Gabriele Leporatti and performed at National Youth Palace. During 2020, I also won the Gold Star prize at Music and Stars Awards Competition. I have also participated in masterclasses of Yura Margulis, Alexander Korsantia, Maurizio Moretti, Stefan Moller, Naomi Ishii, Kurt Seibert, and Eugenie Russo.

I am performing in concerts, festivals and give solo recitals for which I am most grateful and excited. Except for the main interest of my life, I am fond of singing in several musical styles. Besides that I am interested in classical vocal (Opera) and studies singing for three years. Also, I have a great passion for Theatre and Ballet, I always attended performances from early childhood.

I am keen on swimming, skating and skiing. When I was 3 years old, my parents gave me the opportunity to learn all these sports and for 13 years I was improving especially in swimming and skiing. In addition to my hobbies, I cannot leave out cinematography. I love to think about dramaturgy, to write my own stories, scripts and make my fantasy creative with different, various interpretation in which music, art and acting are synthesized. The moment in which emotions are combined with some kind of act and followed with music, ballet or any other way to reach peoples heart makes me happy and full of all positive, pleasant emotions.