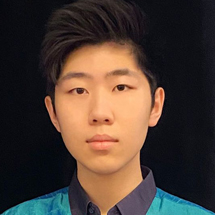 Lixin Zhang is 20 and is currently studying with Professor Fabio Bidini at the Colburn Conservatory of Music in Los Angeles on a full scholarship. When in Christchurch, he also studies with Michael Endres and Neville Baird.

In addition to playing the piano, Lixin also plays the violin and has attained the Licentiate Trinity College London certificate. Alongside his professional music-related activities, Lixin frequently performs in fundraising concerts for charities and other organizations.