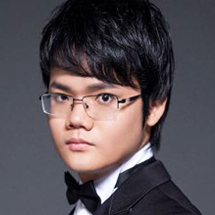 Qisheng Ye was born in a music lover family in China. Ye began learning piano at age of six and performed his first solo debut recital at age of ten. In 2008, he entered the Music School affiliated with Xinghai Music of Conservatory and studied with Dr. Songwen Li.

He also performed in masterclasses conducted by Gary Graffman, Joseph Banowetz, Cristina Ortiz, Eleanor Wong and Boris Slutsky. As an avid collaborative musician and co-founder of The Cohesion Trio, Ye has performed chamber music concerts in Beijing, Guangzhou and Shanghai. He was selected multiple times to participate in the Outstanding Chamber Groups Concert in the Central Conservatory of Music. He won the fourth prize in the Chamber Music Festival of Shanghai Conservatory of Music in 2016.

As a passionate piano teacher, Ye currently holds a Department Assistant position in helping Professor Humpherys with teaching-related agendas at the Eastman School of Music. Besides, he has taught private solo lessons in China since 2017. He was appointed as piano instructor at the Steinway Piano Studio in Shenzhen, China. There, he worked closely with piano amateur students from age 7 to 19 in early introductory to late intermediate level.