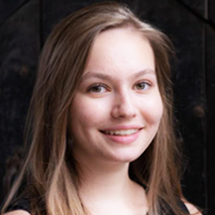 Rose McLachlan comes from a family of musicians and was born in Cheshire in 2002. She began piano lessons with her father and entered Chetham’s School of Music in 2010, initially as a chorister at Manchester Cathedral. She now studies piano with Helen Krizos.

After gaining a high distinction for grade 8 at 11, Rose was awarded the LTCL performers diploma with distinction in 2017. Rose has already had considerable successes in national and international competitions. After being awarded the Sir David Wilcock’s Organ Scholarship in 2014/15 she was the overall winner of the 2016 Scottish International Youth Prize at the Royal Conservatoire of Scotland. As a result of winning the Yamaha Prize in the 2017 EPTA UK competition, Rose performed at St Martins in the Fields. As an overall winner of the Chetham’s concerto competition in February 2018, Rose was selected to perform the Ravel G major concerto with the Chetham’s Symphony Orchestra during the 2018-19 season.

In 2018, Rose won the Chopin and Beethoven prizes at Chetham’s and in 2019 she was overall winner of the junior intercollegiate Beethoven Piano Society of Europe competition. Also, in 2019 Rose was the overall winner of the 11th "Dora Pejacevich” competition organized by EPTA Croatia. She has performed Beethoven's second Piano Concerto five times with orchestra, as well as solo recitals in Lanzarote, St James Piccadilly, London, Portsmouth and Birmingham. With her family, Rose has given recital tours in Scotland.

In March 2019, Rose performed the Clara Schumann concerto with the New Tyneside Orchestra in Newcastle conducted by Monica Buckland. 2018 saw her first commercial recording being issued by Divine Art, performing ‘Five Hebridean Dances’ by John McLeod. In October 2019 she performed Shostakovich’s Second Concerto with the BBC Concert Orchestra conducted by Barry Wordsworth in the Malcolm Arnold Festival which was broadcast on BBC Radio Three. As a result of this concert she was immediately invited to perform live at the Royal Festival Hall as a solo pianist on Radio 3 in a concert scheduled for 6 May 2020. In January 2020, Rose recorded piano duets by the distinguished British composer, Edward Gregson, with her father for a new commercial recording on the Naxos label. In 2021, Rose was a winner of the Pendle Young Musicians Bursary. In September 2021, Rose was a Tabor Piano Ambassador in the Leeds International Piano Competition, resulting in her first published article for the online Pianist magazine. In February 2022, Rose was the winner of the Kirklees Young Musician of the Year.

Rose is now at the Royal Northern College of Music in Manchester, continuing her studies with Helen Krizos. She is extremely grateful to receive financial support from the Waverley Fund.