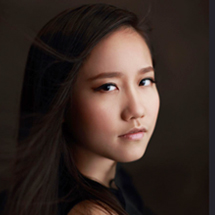 Chinese pianist Sining Liu was born in the city of Nanning, in Guangxi Province, in 1997. She began her piano lessons with Ke Lin in her native city, continuing her studies with Huili Li at the Central Conservatory of Music Piano Academy in Gulangyu.

At that time, she performed the Mendelssohn Concerto No.1 as soloist with the Kharkov Youth Orchestra, also participating in a recital in Kiev, both in Ukraine, as 3rd prize winner of the Vladimir Krainev International Competition for Young Pianists. She also participated in an exchange program with Taiwan, performing the Mozart Concerto No.23 with two Taiwanese youth orchestras, to great acclaim. In 2013 she decided to continue her studies abroad, entering the Manhattan School of Music Precollege Division as a student of Solomon Mikowsky. Her first public performance then was at Weill Recital Hall at Carnegie Hall, with a rendition of Bartók's “Three Burlesques”. Soon afterwards, she won the 3rd Prize in the New York International Music Competition.

In 2015 she entered the Manhattan School of Music College Division with a sizable scholarship, in the class of Dr. Mikowsky. She participated in the Centennial celebration of American composer George Perle at the Lincoln Center Bruno Walter Auditorium with a performance of his “Six New Etudes for Piano”. She performed twice in the International Piano Festivals directed by Dr. Mikowsky as result of his invitation. She shared a recital and performed the Saint-Saëns Concerto No. 5 as soloist with the National Orchestra of Cuba at the newly renovated José Martí landmark theater. She then performed the same concerto and Nights in the Gardens of Spain by Manuel de Falla with the Guangxi Philharmonic Orchestra in China. She also performed Liszt Piano Concerto No. 2 as a soloist with the MSM Philharmonic Orchestra under the baton of George Manahan.