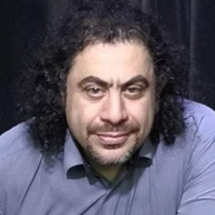 Dominique Salloum was born in Lebanon in 1969. Dominique is self-taught. Diagnosed with Asperger's syndrome as a child he discovered the piano at the age of 13. Music progressively took him out of his autism. The teachers of the Beirut Music Conservatory discovered Dominique’s potential when he was 15. Dominique attended the professional cycle of piano and completed it in two years instead of ten. At 17, he was giving benevolent concerts every week and appeared regularly on Lebanese television.

In 1988, Dominique moved to France and joined the École normale de musique de Paris where he completed his advanced course in two years instead of eight. Abdel Rahman El Bacha and François-René Duchâble took him as a student than as an assistant. Many years later Plamena Mangova also invited him to be his assistant. These great pianists were Queen Elizabeth Competition Grand Prize winners.

Dominique composes for piano and orchestra. He wrote his first chamber symphony at 28 and had the opportunity to conduct the Lebanese Symphony Orchestra in Handel's "Messiah" in 2000. Dominique was preparing himself for a career as a concert performer, but for personal and family reasons he had to change his professional orientation.

For many years he worked for the French government as a public servant, then in 2011 he created an artificial intelligence company with his spouse, developing software for large pharmaceutical and agri-food groups, dedicated to the analysis and optimization of their clinical and scientific data. “I was born for music and cannot live without it. It is the air I breathe. When I was a teenager while watching the movie "The Competition" by Joel Oliansky, I fell in love with Prokofiev's Piano Concerto No. 3 and this concerto has always remained like a dream for me. Thanks to PianoTexas International Festival & Academy and the Cliburn International Amateur Piano Competition, I hope to realize my dream and play the Concerto with an orchestra."