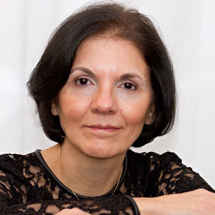 Miriam Berro began studying piano at the age of six and gave her debut solo recital at age of ten. She studied music under the direction of pianist Inés Gomez Carrillo in Buenos Aires, Argentina.

Passionate about mathematics and physics, at 17, she decided to pursue studies in engineering. Miriam graduated in Electronics Engineering from the University of Buenos Aires and Master of Applied Sciences from the University of Sherbrooke, Canada. Her professional career developed in the field of software engineering. She has been working in Montreal since 2007. Currently, she is a Senior Business Analyst at Desjardins Financial Group.

Miriam continues her musical activities with pianist and Professor Ivana Lazarov. Since 2013, Miriam has been finalist and semi-finalist in several competitions in Boston, Washington, New York, Seattle, Chicago and Colorado Spring in the non-professional category. She won the first prize of the McGill Conservatory Piano Concerto Competition in 2017.She was awarded the Second Prize at the Bradshaw & Buono International Competition, 2015 in New York City and the Excellence in Contemporary Music Award from the Washington International Piano Arts Council Festival & Competition 2015.