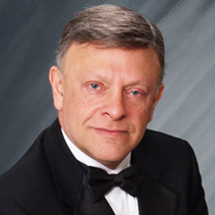 Robert Finley was born in Hull, England and began to play the piano at the age of seven. He studied at Trinity College of Music in London with Norma Fisher, Albert Ferber and in the master classes of Jorge Bolet, Louis Kentner and Vlado Perlemuter. He was awarded the ARCM diploma in piano performance with Honours from the Royal College of Music in 1976. He studied electronic engineering at the University of Sussex and worked in the UK and USA in the field of telecommunications.

In 2013 he was invited back to Manchester, UK to give a recital at the Chetham’s School of Music and played the first movement of the Chopin 2nd Piano Concerto with the Manchester Camerata Orchestra. In 2008 and 2010, he was a winner of the concerto competition during the PianoTexas International Festival & Academy in Fort Worth, Texas and played the first movement of the Rachmaninoff 1st and 3rd concerti with the Fort Worth Symphony Orchestra. In 2012, he played the Liszt Concerto No. 1 with the Boston Civic Symphony Orchestra.

In 2015, he gave a recital at the Gasteig Auditorium in Munich, Germany and two recitals at the Earth Plaza Auditorium in Yokohama, Japan. In 2016, he won the Second Prize at the Piano Bridges Competition in St. Petersburg, Russia and gave a recital at the State Academic Capella Auditorium. In 2018, he gave recitals on Liszt’s piano in Bayreuth, Germany and in Moscow, Russia, at the Alexander Goldenweiser Museum. On March 6, 2022, he was a guest soloist in Gershwin’s Rhapsody in Blue with the Brockton Symphony Orchestra.