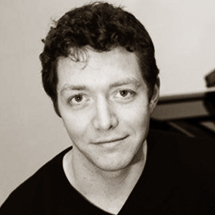 Noah C. DeGarmo works primarily as an Emergency Medicine Physician but his primary passion has always been piano. He has studied with Iris Graffman Wenglin, Xak Bjerken, Matthew Kline, and currently Alessandro Mazzamuto.

He has played in master classes with Leon Fleischer and Tong-Il Han. Concerto performances include Mozart No. 20, Beethoven No. 3, and Rhapsody in Blue, most recently as finalist in the Chicago Amateur Piano Competition in 2012.

After moving to Dallas, he competed in the Cliburn International Amateur Competition as a quarterfinalist in 2016 and received second place later that summer at the Chicago Amateur Piano Competition.

Outside of music, he enjoys his two golden retrievers, Mayzie and Ella, as well as travel and cooking.